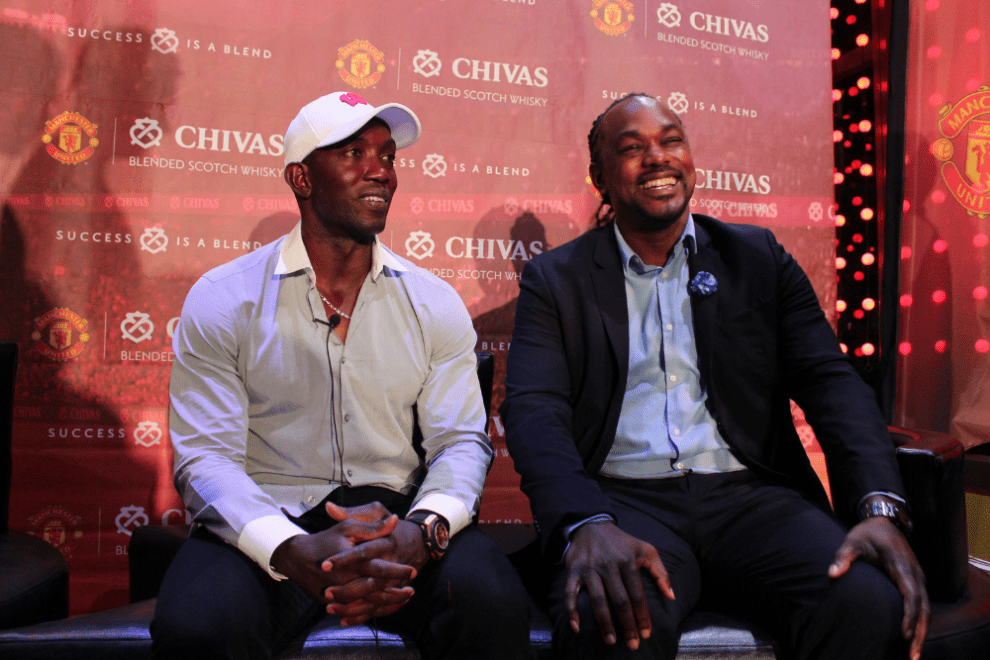 Luxury blended Scotch whisky, Chivas, has teamed up with the world’s biggest football club, Manchester United (Man Utd.), in a three-year global partnership. The collaboration will see Chivas and ManU join forces to celebrate their collective belief that blended is better – in life, football and Scotch. Just as Chivas brings together Scotland’s best malt and grain whiskies to create something extraordinary in the bottle, ManU brings together the world’s best footballers, a dedicated club team and a legion of fans all around the world to create extraordinary results on the pitch.

On the long list ofMan Utd.‘s best, is Tobagonian striker, Dwight Yorke. Scoring 52 goals for Man Utd. during his time with the club (1998-2002), Dwight was also the assistant manager of the Trinidad and Tobago national football team. At an international level, Yorke represented this country on 74 occasions, helped his nation reach the semi-finals of the 2000 CONCACAF Gold Cup, and also helped the team to qualify for the FIFA World Cup for the first time in 2006.

Having enjoyed an outstanding career with Man Utd., we were giddy with joy to see and meet this local football legend at the launch of Chivas and Man Utd.‘s joint venture. Who better to represent the perfection of blending than a national hero from Trinidad and Tobago, a country so diverse it’s referred to as a callaloo nation. It was our great pleasure to dive into conversation with Dwight. Sports Ambassador for Trinidad and Tobago

The Residence Lounge buzzed with excitement and camera lights flashed every which way, but Dwight delighted in describing his role as a sports ambassador for Trinidad and Tobago.t

“When first given this role in 2006, I was still playing football and it was new to me. Over the years though, I’ve come to understand the great significance of being a role model for younger sportsmen and sportswomen of Trinidad and Tobago.

For Yorke, it’s more than being a sports ambassador, he loves the opportunity he has to represent Trinidad and Tobago on an international stage and increase people’s awareness of this sweet island.

“Along with my best friend, Brian Lara, I’m blessed with the chance to show the world the high quality Trinidad and Tobago can produce. This country is so rich with talent!”

With the ultimate goal to promote Trinidad and Tobago all around the world, this partnership between Chivas and ManU represents for Yorke a blending of culture. What’s more Trini than a well-blended drink and a game of football on the beach?

It doesn’t stop there though, Yorke was keen on leaving an inspiring message for young sportsmen and women – having talent is only the beginning.

“It is vital that you build your character. Mix your talent with fundamental habits for hard work, sacrifice, discipline, commitment, and dedication your passion. You have to work for it, nothing in life comes easily.”

Throughout the season, Chivas will be collaborating with Manchester United to demonstrate that blended is better – by encouraging fans to celebrate the blend that makes them unique, and showing that when players collaborate with their teammates they can achieve the greatest success.

Jean-Christophe Coutures, Chairman and CEO at Chivas Brothers, commented “Blending has been in our DNA ever since James and John Chivas pioneered the art in 19th century Scotland. Partnering with Manchester United was therefore a natural fit; we both firmly believe that great things can be achieved when we come together – from balancing the perfect blend of malt and grain whiskies that go into our Scotch, to using the perfect combination of players’ skills on the pitch to create a winning team. We look forward to using our spirit to help showcase the spirit of the Club and its fans all around the world.”

Richard Arnold, Group Managing Director at Manchester United, commented: “Manchester United’s history is built on teamwork and we embrace Chivas’ belief that ‘blended is better.’ Our success both on and off the pitch allows us to bring together the best mix of people who help to make our Club the global name it is today. Each individual has their own skills but the way in which they blend together is what makes us a united team. It is a pleasure to welcome Chivas as Manchester United’s Global Spirits Partner and we look forward to working together to share this belief with our fans.”

Manchester United is one of the most popular and successful sports teams in the world, playing one of the most popular spectator sports on Earth. Through their 140-year heritage the Club has won 66 trophies, enabling them to develop the world’s leading sports brand and a global community of 659 million followers.  The Chivas partnership showcases the unique blend that makes Manchester United’s footballers who they are – and how when they collaborate with their teammates they can achieve the greatness success. Find out more about the partnership and why blended is better at chivas.com.