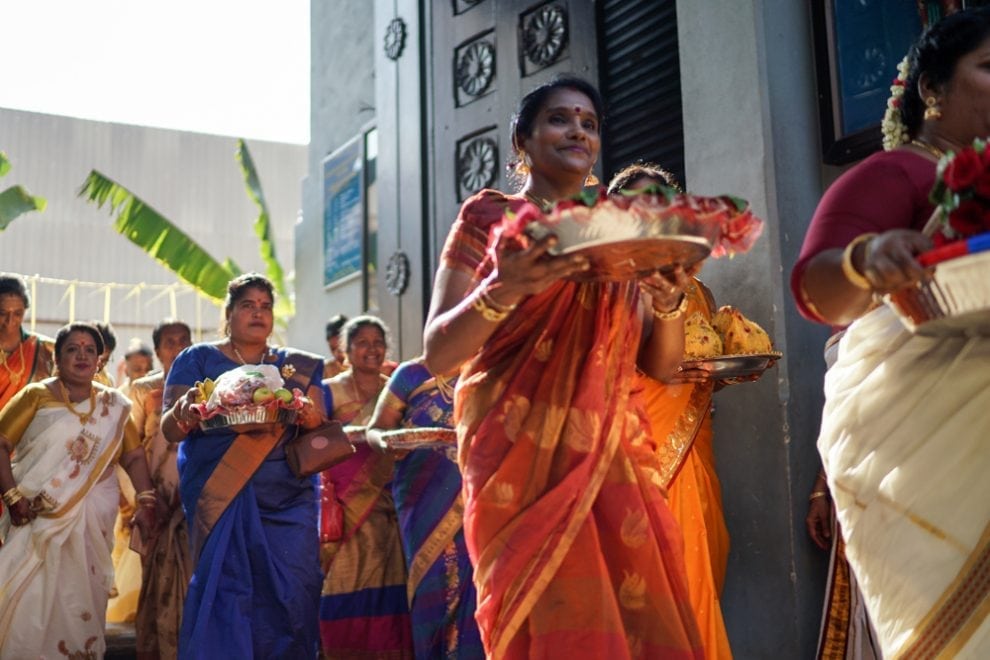 Without a doubt, the fastest way to indulge in a bit of the East Indian culture in Trinidad and Tobago is through your stomach. If you ask any Trinbagonian, what their favourite thing about East Indian culture is, just about 99% of nationals will proclaim the deliciousness of a number of Indian delicacies. In fact, Trinidad and Tobago’s expression of Indian cuisine throughout the years is unlike anywhere else in the world. It has produced a slew of mouth-watering local staples that thousands are willing to line up for night or day. Some have mastered recipes of Indian delicacies handed down to them over the years, whilst many restaurants have established fantastic Indian inspired menus. Either way you turn, it is definitely not difficult to enjoy some semblance of Indian cuisine in Trinidad and Tobago.

Get Invited to a River Lime

The surest way to get free Indian inspired cuisine in Trinidad and Tobago, is to get invited to a “river lime”. A “river lime” is simply spending the day with friends and family at the river. Although “river limes” are not exclusively an Indo-Trinidadian experience, you cannot have been invited to one that does not serve curried duck or curried crab and dumpling and have had an authentic experience. Freshly cooked on the banks of the river after a refreshing dip in the cold river water amidst the blast of Chutney Soca music is definitely an experience that you have to find yourself invited to.

Not unlike the delicious food that was crafted to suit the Trinbagonian palette, Chutney Soca is the fusion of Afro and Indo inspired musical sounds that is sure to have you dancing and singing along to its contagious rhythms. Though enjoyed throughout the year, Chutney Soca gets to shine during the Carnival Season, especially during the Chutney Soca Monarch where the winning performer is crowned Chutney Soca King/Queen. Not only is Chutney Soca great to dance to, its lyrical content can either have you nodding in agreement to its familiarity or rolling on the floor with laughter to its hilarious stories. Chutney Soca music is a great way to get an insight into the everyday customs and experiences of Trinbagonians as well as a great way to marvel at the unique way we express ourselves.

Though T&T is host to a multitude of mosques located across the country, this mosque is a pinnacle of the islamic community that is both rich in history and beautifully designed, on the inside and outside. It is said that the first East Indians that arrived in T&T on the “Fatal Razack, ” an Islamic name, were Muslims. As such, experiencing the Islamic faith is an essential part of the Indo-Trinbagonian experience in T&T. Seated right next to this mosque is The  Muslim League(TML) Primary School, committed to the teachings of Islam.

Similarly, an invitation to a Hindu wedding in Trinidad and Tobago is an excellent way to experience Indo-Trinbagonian culture in its most authentic form, as the Trinbagonian Hindu Wedding is of a calibre of its own. In addition to a deeper understanding of a religion with beautiful rituals, you will be privy to perhaps all the facets of Indian culture East Indians were able to grab onto since their arrival on the shores of Trinidad and Tobago so many years ago. The vibrancy of their language, music and fashion throughout the wedding ceremonies will leave you awe-inspired. The presentation of Indo-Trinbagonian cuisine that we all love will make you resemble like the very definition of gluttony. It is an experience like no other to be filled with envy as the colourful pomp and celebration of a Hindu Wedding procession you were not invited to blasts past you in the streets.

Try the Art of Mehndi

Though not many places practice the art of mendi in T&T, the few that do make stunning temporary and permanent designs on the feet and hands of interested patrons during Indo celebrations in T&T. The floral patterns meant to be temporarily applied with henna paint is a form of body art from Ancient India that can now be seen as having inspired many trendy permanent tattoos, colouring books and other forms of art. Many locals can be seen with temporary henna tattoos during any one of the Indo Trinbagonian festivities that occur during the year.

In the same way that Mendi makes a very bold fashion statement during Indo festivities, Indian traditional clothing also makes a colourful splash during these times. Whether the Sari,

Salwar or Dhoti, the most fashionable and colourful fabrics can be found by the majority at the India Expo in Chaguanas, Trinidad. Since these merchants claiming to be from India itself, set up their marketplace for a “one time only” grand sale, they have not left us. As such, jewellery, bags, shoes, skincare treatments and many more authentic Indian designs present themselves in abundance at the India Expo at for remarkably low prices. This is essentially where you should go to shop till you drop. The constant barter for the beautiful products that works well with so many of our Indo-Trinidadian festivities is an experience in and of itself. If you’re looking for a place to shop till you drop for Indian inspired fashion products, toward the India Expo you should go.

Visit the Temple in the Sea

Another great way to experience the culture of the Indo Trinbagonians is to take a more spiritual route. Though a large number of Indo Trinbagonians are Muslim and Christian, a vast majority of them are Hindus. Thus, the Temple in the Sea is a sacred Hindu pilgrimage site built for Hindus around the world to visit and the rest of the world to admire. Sitting peacefully on the west coast of Waterloo, Trinidad and Tobago, the Temple in the Sea adorned with colourful statues and flags, has a rich history that anyone with a love for persistence and culture can admire and appreciate. It is indeed a testament of one man’s love for Hinduism.

Another magnificent testament of Hindu spirituality stands 85 feet tall on the grounds of the Dattatreya Yoga Center and Mandir in Carapichaima, Trinidad. Although the temple itself is adorned with beautiful statues and designs of Hindu gods, goddesses and symbols, the main attraction of this site is the 2nd tallest Hannuman structure in the world, second only to India’s own. Built with a Dravadian aesthetic by South Indian artisans, the revered monkey god Hanuman towers over worshipers and tourists alike as they make their way into the temple to worship or do yoga. It is definitely a sight to behold that is unique to Trinidad and Tobago only. Experience a number of religious festivals

In addition to these religious sites, there is an array of religious festivities that are all marked with a distinct Indo Trinidadian way of celebrating. The festival of Phagwah is eagerly anticipated throughout the year by all ethnicities of society, due to its vibrancy, colour, and resemblance to the pre-carnival celebration of J’ouvert. Likewise, many Trinbagonians of different ethnicities also partake in the lighting of thousands of deyas during Divali and wait in awe to light up the night sky. Eid too is anticipated and celebrated by many of the Indo and African community, during which time it is customary to feast on vegan Roti and sawine. Many of the less fortunate citizens of the country would also look forward to the charity from the Islamic community. These festivals bring together the nation in many ways and is a great way for you to broaden your perspective of life.