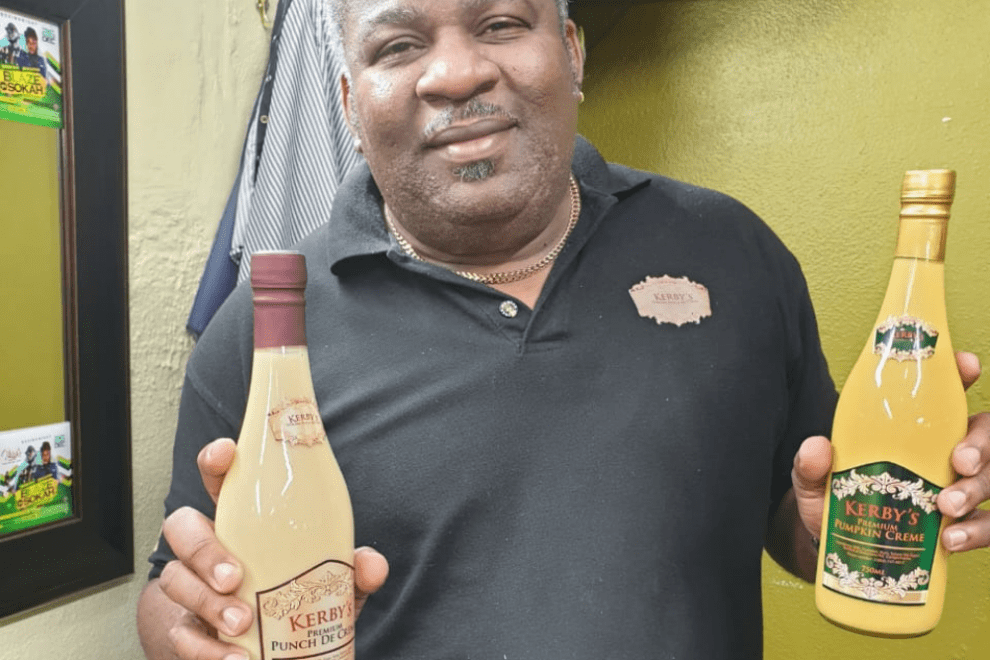 How T&T favourite Christmas drink is helping Kerby go from barber to bar.

To his great surprise, Kerby Corraspe sold 20 cases of ponche the crème the first Christmas, 2016, that he made the drink to satisfy orders from family, friends and their friends. With 12 bottles a case, it added up to 240 bottles.

“Two years ago… my wife she had some friends who wanted some, so we made some for them, and I just kept growing”, Kerby told us at Life in Trinidad and Tobago (LITT).

As Christmas 2017 rolled around, he figured that he could increase his production to 30 cases, or 360 bottles. He was wrong. Very wrong. He shifted 70 cases – 840 bottles – more than three times his output of the previous year.

Kerby, a thick-set 44 year old from Freeport, owns a well-known barber shop at a mall on Busy Corner in Chaguanas. Before making it commercially, he’d make it for fun, for himself. Christmas and parang culture ran strongly in the family, so it was a natural part of his annual Christmas preparations. “I used to go (to parang festivals) as a child with my father; that’s what I used to drink then. I know the good ones from the bad ones”.

“Seven, eight, nine… I ent getting alcohol, but I getting pleeeeeenty ponche de crème. I taste a lot”.

And so his passion became something far more commercial, as the popularity of Kerby’s spread by word of mouth.

“I decided to invest in labels, bottles and seals and thing and to do it commercially. Take it to another level.”

And take it to another level he did. By the second year, Kerby’s could be seen on shelves of a number of big supermarkets. That was the year of his 350% spurt in sales. In the past year he has branched out, opening a bar, nightclub and lounge around the corner. That growth was driven in part by his booming ponche the crème business over two Christmases.

That and the ponche de creme businesss have taken up so much of his time in the two months to Christmas, that he has hardly had time for his barbering, something he has been doing for 26 years. From about mid-November right through to a week before Christmas, his kitchen is totally transformed. Nothing else gets made there, and his operations have to be maintained to a high standard, with everything completely sterilized.

Over the years, when made it for himself and relatives and before he hit the big time, he did a little bit of refinement of his recipe. LITT asked him where he got his original recipe from.

“I dare not say which one of my aunts”, he laughed. “Over time I tweaked it – a little bit of this, a little less of that”.

He says he’s noticed a change in how small operators are approaching their businesses. They’re adopting a more professional approach to the labelling and marketing of their ponche de crème.

“This year, a lot of small business people went in that direction. Like they see that it was possible”.

Was he a game-changer?

“I would say that. But it have enough for everybody”.