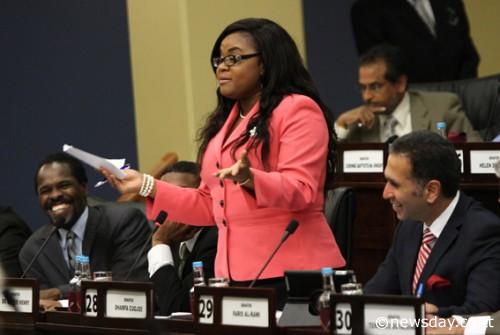 Tourism Minister Shamfa Cudjoe explained the reports that she racked up an astonishing phone bill of $59,000 during a four-day period.

Tourism Minister Shamfa Cudjoe explained the reports that she racked up an astonishing phone bill of $59,000 during a four-day period.

More information on the bill was revealed in the Senate by Senator Christlyn Moore on Monday, during a discourse on the half-term budget assessment. The bill caused some uproar at the House due to its excessive nature and its non-compliance with the current government’s stand on cutting costs in light recent economic challenges.

In a detailed statement yesterday, Tuesday, Cudjoe explained that she was a participant at the Caribbean Tourism Organization’s Caribbean Travel Marketplace which took place in Nassau, Bahamas, in the capacity of Minister of Tourism from January 29 to February 3, 2017. She added that during this trip, she had to deal with a lot of state matters that required urgent attention and that she remain fully accessible via phone for the entire period she was in the Bahamas.

“When I was presented with this bill upon my return, I was very surprised and worried because of the exorbitantly high nature of the bill. During an investigation which I requested that the TSTT carry out, I found that the actual call usage in that period was $1,111.06 with a further $50,616.61 billed as roaming data charges and value added tax of $6,562.13 on the accrued amount,” said Cudjoe in her statement.

TSTT has indicated that they do not have any control over regional and international interconnectivity charges as these were at the complete prerogative of the carriers in the Bahamas.

Cudjoe also gave her assurances to the Ministry that she would not abuse her role as a Government Minister and would ensure fiscal judiciousness in all her dealings as Minister of Tourism.